As this episode began, I decided to take it easy on Continuum. If the show wants to step away from the overarching plot sometimes and serve up a self-contained episode, that’s okay. It may not be the show I wanted, but it can still be an entertaining show. If that’s what the writers want it to be, it’s a waste of time for me to whine whenever an episode doesn’t live up to “A Test of Time”… and it was getting pretty dull writing the same thing every week, anyway.

So I was all set to like this episode, even as it opened with a series of scenes setting up a murder mystery involving two murder-suicides and futuristic mind control. But I got a little anxious when it was revealed that the murderers were both beta testers at a video game company called Tendyne. Whenever a crime procedural sticks its toe into some aspect of “nerd culture,” everyone usually comes away looking desperate and stupid. See: the “First Person Shooter” episode of the X-Files, or CSI’s infamous “Fur and Loathing.” 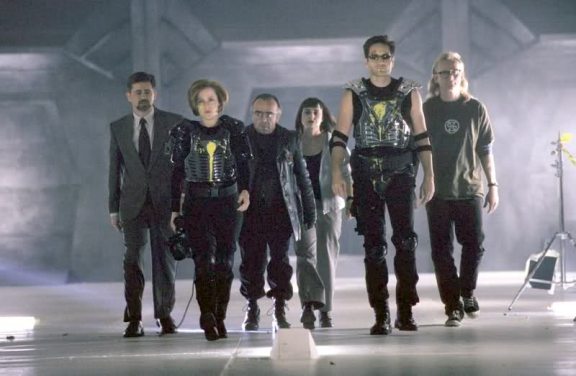 Yeah, not a good look.

Before we go any further: I’m not the kind of person who feels the need to defend “nerd culture”—which shouldn’t even be a thing, but that’s an argument for another time—but I am close enough to that subculture to feel highly embarrassed whenever it gets reduced to a series of buzzwords or blamed for all of society’s ills. “Playtime” is guilty on both counts, but considering how stupid the whole “mind-controlling-video-game” plot-line is, I think everyone involved did the best tehy could.

The buzzwords are especially heinous. Oh, man. Every time we cut back to that plotline, it gets worse. I was happy to see Betty getting some characterization, but that joy was undercut whenever she spouted off about an “FPS with SLG elements” or her friends in “the hacker world.” It’s not that she even says anything inaccurate, it just hurts my ears to hear those terms thrown around. It doesn’t get bad until Betty explains the underground market for an energy drink that gamers are addicted to, and it doesn’t get REALLY BAD until, in one scene, we find out that one of the murderers was a furry and also hear the following exchange:

“We prefer to call it Cyber-LARPing.”

I want to give the writers the benefit of the doubt. The twinge of horror I felt at that exchange may have less do to with the quality of the writing and more to do with some deep-seated insecurities from my years spent identifying as a “nerd.” Hell, the game they’re talking about could actually be descripted as “cyber-LARPing” if that phrase wasn’t just an absolute cluster of pseudo-relevant slang. But I’m less inclined to go easy on an episode that ends with Kiera being turned into a mindless pawn of the villains because she played a video game… although the image of Alec strapping on a Virtual Boy headset and diving into Tendyne’s “game codes” was funny enough to almost make up for it.

At least Liber8 was actually a presence in this episode. Even though they weren’t behind the original murders, they did strike a deal with the real killer—spoilers, it was the chief programmer of the game, a.k.a. the only guy who could possibly have done it—to help them attack Kiera, which is what I was begging for last week. Having the villains actually BE the villains gave this muddled episode a jolt of life towards the end: when Liber8 finally gets control of Kiera’s mind and sends her on a murder spree, intended to wipe out her partner and herself, the sequence that follows is nicely tense. Sure, it’s lame that the climax of the episode completely removes Kiera’s agency and reduces the main character to a literal pawn, but at least it has your attention.

The writers squander that, too, though. As soon as Kiera shoots the programmer and attacks Carlos, all sorts of questions start flying: how will they stop her? What will happen to Kiera once she’s free? Will she still be able to work with the police department? Will she be wanted for attempted murder? Will Kiera go on the run, ditching Carlos and the rest of the law enforcement cast, a group of characters that rival the Miami Metro on Dexter in terms of irrelevancy?

Ladies and gentlemen, the savior of humanity.

The answers: easily, nothing, yes, nope, and nooooooo way. Once Kiera has her mind restored, everyone immediately accepts that her will was overridden by an evil programmer, including the chief of police, whose only requirement for his continued cooperation is that Kiera see “a specialist.” Not even a specialist within the department, she can just go for a check-up with any doctor she knows. Since she chooses Alec, I assume that no one’s even going to talk to the doctor afterwards.

If Continuum wants to devote half a season to single-episode cases that are mostly unrelated to the main plot, that’s fine. Everything doesn’t have to be 100% serialized, I can accept that. But the writers need to at least give us cases that follow-through on what they set up, and don’t lean on ridiculous green-screen “Virtual Reality” sequences or ninjas or whatever stupid plot point stinks up the episode next week.