Emily Warren occupies a unique space within the music industry. She’s spent the last four years as an extremely prolific songwriter, collaborating on high-profile songs with some of the biggest names in pop music and even appearing as a featured performer on several occasions. Her writing is sharp and emotionally insightful, but her strong pop sensibilities always shine through with big, radio-friendly hooks.

At the same time, her debut album Quiet Your Mind, released last month, would be more at home on the alternative charts than almost anything else she’s done. The songs all have the high level of polish you would expect based on her previous work, but the actual content mostly hews closer to indie rock than to anything like “New Rules” or “High Five.” Another unorthodox aspect of her career is her association with the Chainsmokers, a close working relationship that far exceeds her investment in any of the other artist she’s worked with. Warren at times seems to be single-handedly driving the duo’s evolution from faceless EDM producers into a legitimate musical group, one well-written song at a time.

With all this in mind, I had one question going into her concert at Rough Trade in Williamsburg: what was the crowd going to be like? This is something I think before arriving at most concerts, and often the answer turns out almost comically predictable (two highly personal examples: Mountain Goats shows are packed wall to wall with sad young queers, many of whom are likely practicing Wiccans, while Magnetic Fields performances are so completely stacked with bespectacled English majors that I almost felt I was being made fun of), but this one was particularly mysterious, given that Warren’s big-name collaborations combined with her still-nascent solo career make her exact level of fame difficult to discern.

Rough Trade is an intimate venue — the performance space is actually in the rear of an independent record store, but the whole building has those wonderful high ceilings that you can only get on the far outskirts of Brooklyn — but the show sold out so quickly that two further blocks of tickets were opened up in the week leading up to the show. Even as the crowd filled in and I found myself crammed shoulder-to-shoulder with a mass of fans in front of the stage, understanding continued to elude me. Who were all these people? There were easily hundreds of them; surely they couldn’t all be running an obnoxiously self-referential Chainsmokers fan blog.

The short answer, which hit me as soon as Warren began her first number (“Something To Hold On To”) to wild cheers and everyone around me began to sing along, is simple: the audience was filled with people who have, one way or another, come to discover Emily Warren’s music and found something meaningful in it. People who had already fallen in love with the music of Quiet Your Mind and were here to see those songs performed live. In other words: fans.

The longer answer is a bit more complicated, but not in a bad way.

Before we get to that, let me back up: the opening act for the evening was Annika Zee, a Canadian-born multimedia-artist/musician who produces the exact kind of dreamy and atmospheric music that you could imagine being set against a projection of an experimental short film, or serving as the soundtrack for a confusing modern dance performance. Not in a bad way, to be clear: Zee’s music is endlessly intriguing, alternating between soothing soundscapes and controlled chaos. A song built around a simple drum loop and a spacey synth will be suddenly pierced by a confrontational vocal that sets your hair on edge. Again, not in a bad way. Zee also has the sort of casually commanding stage presence that you might expect from an artist who maintains full control of her work, from writing and production all the way down to visuals and cover art.

Warren was similarly at ease on stage, though she brought a more openly giddy energy to her performance. Warren was exceedingly grateful to the audience from almost the first moment, enthusiastically commenting on the size of the crowd and reacting with infectious joy when she realized how many people had already memorized the lyrics to her songs. Backed by a four-person bad, Warren sang every song on Quiet Your Mind, and while there were no notable deviations from the album arrangements, her vocals were given considerably more room to shine than they do on the album.

Warren has a unique voice, powerfully emotive with a sharp edge and crisp annunciation, closer to a jazz crooner than the sort of pop star she usually writes for. It isn’t that her vocals are buried or obscured on record, but even while her lovely falsetto is on full display throughout the album’s eleven tracks, some of her voice’s more interesting qualities remain obscured. My favorite of Warren’s vocal performances is actually “Until You Were Gone,” her first outing with the Chainsmokers, where she burns through the vocal line with an abandon that she’s rarely matched since, letting the edges of her voice fray in a manner that matches the driving force of the music. The quieter tones of Quiet Your Mind suggest that she’s not currently interested in that style of singing, which is fine, but it was still exciting to hear her sing live and be reminded of how bracingly powerful her voice really is. 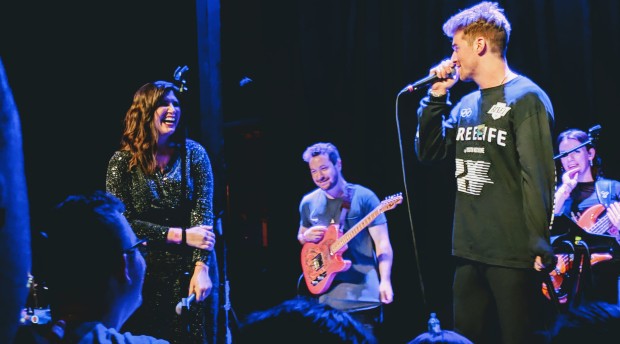 In what was a real treat for those of us depraved enough to consider ourselves “Top 40 nerds”, Warren performed an acoustic medley of some of the songs she had written for other artists, including “New Rules,” “High Five”, “Capsize,” and, of course, “Don’t Let Me Down.” This was followed shortly thereafter by a full-band performance of her Chainsmokers-assisted summer single, “Side Effects,” which featured a surprise appearance by Andrew Taggart, who danced onto the stage holding two full tequila shots before performing the background vocals during the song’s breakdown. Taggart followed this cameo with a heartfelt speech commemorating Emily’s accomplishments (during which he referred to her as “the third Chainsmoker,” which suggests that I was at least on the right track when I wrote this piece back in April).

It was a show filled with good vibes and affable stage banter, suggesting that Warren was incredibly comfortable with the crowd, for reasons that became clear as the night went on. New York City is Waren’s hometown, so this performance (which she humorously referred to as the second stop in a two-show tour) was a sort of homecoming, and that was reflected in the audience. Aside from the family and VIPs cordoned off in the balcony around the performance space, there were quite a few of Warren’s friends packed into the front of the crowd, a fact to which I was ignorant until several of them joined her onstage for a recreation of the choreography in the “Poking Holes” video.

Undoubtedly, the proximity of so many loved ones contributed to Warren’s comfort on the stage, which transformed even minor errors — choking on the first line of a song, spilling her drink over her setlist, her microphone somehow coming unplugged — into utterly charming moments. It’s a rare pleasure to see an artist perform in their home town; Hanif Abdurraqib once theorized that the anticipation of leaving the concert and getting to fall into their own beds inspires performers to leave it all on the stage. Emily Warren may have been playing with a home field advantage, but the musical skill and engaging stage presence she demonstrated last night were certainly no fluke. Watching a performance like this, one can hardly disagree with Taggart’s prediction that she has plenty of similarly successful shows in her future.