Nicole, 26, is walking through Prospect Park in Brooklyn, NY, holding the leashes of four separate dogs, when her phone begins to ring. Upon hearing the ringtone (“Ignition [Remix]” by R. Kelly), she knows exactly who is calling, so she answers.

NICOLE: Uh, yeah, I know it’s you. That’s why I said, “hey, bitch.” Do you think I just answer the phone like that all the time?

NICOLE: Just so you know, I’ve got a bunch of dogs with me right now, so if I lose you, it’s… well, I guess it won’t be a reception thing, but if one of the dogs tries to run away, or something, I might have to hang up.

NICOLE: This whole thing is such bullshit. I thought when I signed up for this stupid dog-walking app I’d get paid to hang out with a bunch of cute dogs, but all I get are these huge, slobbering idiots who want to fight every other dog they see. Yeah, that’s right, Brutus, I’m talking about you. What? You got a problem with that?

JESS: That sucks. So–

NICOLE: Wait, why are you calling me right now? I didn’t miss our weekly Skype call, did I?

JESS: No, that’s on Saturday.

NICOLE: Oh, hey, do you think we could change it to Sunday this week? I’ve got a callback for an audition on Saturday.

NICOLE: Thanks! It’s for Midsummer Night’s Dream, again. Which, like, ugh. And it’s in Jersey, so that’s a shitty fucking commute, if I get it. But I had an audition last week that I’m still waiting to hear back from, it sounds like it’s gonna be really cool. It’s an all-female production of Zoo Story and–

JESS: Can you shut up for, like, one second, so I can tell you why I’m calling?

NICOLE: Aw, Jess. Go on, tell me what happened.

JESS: Yeah, Becca C. Who else would it be?

NICOLE: Well, it could have been Becca K.

JESS: So. Two days ago, I spent the night at Terry’s place.

NICOLE: Oh, how’s that going, by the way?

NICOLE: Oh, can we do Sunday morning, though? I have a shift at the restaurant in the afternoon.

JESS: I wake up Thursday morning and I head back over to our place, and it’s still early — like, eight A.M. And I pull into the apartment complex, and I see right away that Becca’s car isn’t there. And, like, that’s weird, right? Because Becca doesn’t ever get up before ten. Eleven, if she’s been out drinking. Which… she usually is.

NICOLE: Did she go out on Wednesday?

JESS: I left the apartment at eight P.M., and she was still wearing her sweatpants.

NICOLE: Yeah, but… sometimes she doesn’t get ready to go until like, after nine, right?

JESS: True. But only if she’s done her hair ahead of time. And you wanna know what the state of her hair was, when I left the apartment?

JESS: Yeah. She wasn’t going anywhere. And plus, she had been putting out this sort of, like, weird energy all day? I mean, she had been watching The Office since I got home from work, which is not unusual, but she didn’t seem very into it. It as like she had something on her mind.

JESS: Just talking to myself here.

JESS: It wasn’t just weird — I know what weird Becca is like. This was different. So, when I pull into the parking lot the next morning and don’t see her car, my first thought is, oh! She’s finally doing what she said she was gonna do six months ago, she’s going to meet with an academic advisor at the University and see about re-starting her Masters program.

NICOLE: Didn’t she complain about that program, like, all the time? Would you really want that?

JESS: It’d be better than her lying around the apartment all day, doing nothing, complaining about her parents.

NICOLE: Oh, God, never mind. I just remembered what it’s like to hear Becca talk about her parents. I almost forgot.

JESS: I never got that luxury. You’re so lucky.

JESS: (laughing) Shut up. So, when I got into the apartment, something felt really wrong, like, right away. Like something was different. I couldn’t figure out what it was, but it felt so weird that I decided to check on Becca really quick. I go to knock on her bedroom door, but then I see that it’s not even closed. I push it open the rest of the way, and you know what I see?

JESS: Nothing! The room was totally empty! Becca cleared out all of her shit and left literally in the middle of the night.

NICOLE: Are you serious? She didn’t leave a note or anything?

JESS: Nothing. I tried texting her, calling her. No response.

JESS: Yeah, but here’s the thing: she didn’t just take all of her shit. When I went back into the living room, I realized why it felt so weird in there. Because a bunch of my shit was missing.

NICOLE: She stole your shit?

JESS: She stole my shit! She took my big lamp, she took a bunch of my books, she took my ukelele–

NICOLE: The ukelele I got you for your birthday?

JESS: She cleared out about half my bottles of liquor. She took all of my How I Met Your Mother DVDs.

NICOLE: Oh my god, who is she?

JESS: Nicole. That’s not even the worst of it. You know what else she took?

JESS: She stole my mattress.

NICOLE: Like, she took it right out of your room?

NICOLE: Oh. Well… do you think maybe she forgot that you switched? And she just thought she was taking her own mattress?

JESS: No! Because the first mattress she had, the one that ended up in my room? That was my mattress, too.

NICOLE: Wait, so, Becca’s parents are like, super-rich, and not only did she not have her own mattress when you guys moved in together, but she took yours with her when she left?

NICOLE: What a fucking psycho.

NICOLE: To who? Psychos?

JESS: Well… yeah. But you’re not supposed to say ‘psycho’ any more.

NICOLE: You’re right. But, like… what other word is there? How else would you even describe that behavior?

JESS: That’s not even the worst of it. The mattress that she stole? I was actually borrowing it from my aunt and uncle. They gave it to me for free, I just had to promise I’d have it back before their son finished college and needed it for his apartment, and I said, sure, because I thought by then Becca would have gotten her shit together to a high enough degree that she would at least be able to buy her own fucking mattress.

NICOLE: Do you know when your cousin is moving in to his apartment?

NICOLE: Jesus! This is so completely fucked. Like, I knew Becca had problems, but she literally robbed you and disappeared. Who even does that? Who steals a fucking mattress?

JESS: And now I have to pay for a replacement mattress. I’m out at least six-hundred dollars, not even counting all the rest of the shit she stole.

NICOLE: Wait. Wait, hold on. Do we know for sure that Becca took all that stuff?

NICOLE: Oh! What if someone broke into your apartment last night? And they took all your stuff, and then–

JESS: Nicole, calm down, Becca’s not… dead, or kidnapped, or whatever.

NICOLE: How do you know?

NICOLE: I’m trying to do this thing where I don’t check it until I’ve done at least one productive thing, because you know I used to check it right when I woke up? And not just Insta, I would check Facebook and Twitter, too — and Snapchat, when that was still a thing — and first of all, it was making me super anxious, because the world is so fucked that you can’t read the news without having it fuck up your whole day, and second it was, like, a huge time suck, right at the beginning of the day, when I should be getting up and jogging or doing meal prep, or… whatever.

JESS: Well, Becca posted an update to her story just one hour ago. 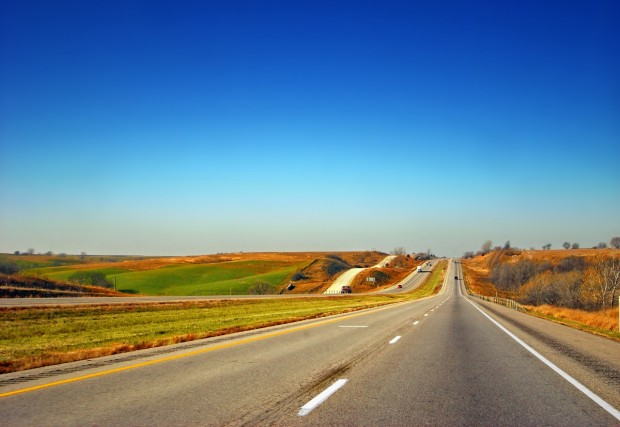 NICOLE: Oh, shit. Where was she?

JESS: According to the location tag she used, she’s somewhere in the middle of the Nebraska.

NICOLE: What the fuck.

JESS: There were two posts. The first one was just a picture of a corn field or some shit —

NICOLE: What filter did she use?

JESS: And there was a caption, and I quote: “Start spreadin’ the news.”

JESS: Do you know what that is?

NICOLE: It’s fucking gross is what it is.

JESS: Do you know what the second update was?

JESS: Nicole. This bitch was parked by the side of the road, sitting on the hood of her ugly-ass broken-down Range Rover, flashing the peace sign, with the caption, “I’m leavin’ today.”

JESS: And you know what was strapped to her roof?

NICOLE: Becca is driving from Boulder to New York City with your mattress strapped to the roof of her car?

NICOLE: Jess, I… I don’t even know what to say. This is the crazi–this is the most bizarre thing I have ever heard. How could–oh, fuck.

NICOLE: Talk to you Sunday?

JESS: Talk to you Sunday.

NICOLE: Cool. Jesus Christ, your fucking mattress — BRUTUS IF YOU DO NOT GET YOUR NOSE OUT OF THAT MAN’S CROTCH RIGHT NOW NOW YOU ARE GOING HOME IN A BODY BAG, I SWEAR TO GOD.