“You Owe Me” is an uncomfortable song to listen to. But not for the reasons you might think.

Broadly speaking, this is a song about the Chainsmokers and their relationship with the press, but if that were all it was, it wouldn’t bear much discussion. People have been writing songs like “You Owe Me” pretty much since the concept of popular music came into existence. In a sense, it’s understandable, even inevitable: creators draw inspiration from their personal lives, and if you’re a popular musician, a good chunk of your life is spent being publicly scrutinized. That being said, it’s often difficult for non-famous listeners to relate to the struggles of the rich and the famous; there are artists who manage to bridge that divide, but for the most part, complaining about bad press makes you look like a spoiled brat.

Even still, I would argue that the Chainsmokers have better cause than most performers to worry about their relationship to the media. Most musicians writing in this particular sub-genre are responding to years of unwanted attention — for example, “Leave Me Alone” finds the Michael Jackson venting about an entire lifetime of scandal and rumor-mongering. And while Jackson’s treatment by the press is an issue to complex to be properly explored here, I don’t think it’s unfair to say that he certainly provided a lot of material for a hungry press.

The Chainsmokers are no strangers to the tabloids, but when they write about “the papers,” they’re not writing about the National Enquirer or The Sun — I mean, they might be, but not really. They’re really writing about one interview they did for Billboard in 2016, a single article that will define their public persona for years, if not their entire lives. Andrew Taggart and Alex Pall haven’t lived the kind of long, bizarre life that Michael Jackson had when he wrote “Leave Me Alone” — they made a couple of bad jokes over the course of one afternoon, and now everyone thinks they’re awful.

This doesn’t make their lame lyrical swipes at the media any more profound, but it’s worth remembering that these guys know first-hand that one bad interview can change your entire career and possibly your life, and not always for the better. With this in mind, their attempt to brush it all off with the line, “they’re painting but they can’t leave a mark,” is very sad, borderline tragic, and not in a way that seems intentional.

Most of the first verse is pretty unremarkable — though it is worth noting that whenever someone uses the word ‘awesome’ in a pop song, they’re trying to seem fun, quirky and relatable, and I have yet to see it work. But then we get to the chorus, which begins in the same hater-baiting self-pity realm as the rest of the song, but takes a turn into something much more interesting:

You don’t know me
Don’t you think that I get lonely?
It gets dark inside my head
Check my pulse, and if I’m dead, you owe me

Even if you find the subject matter of this song hackneyed and obvious, you have to give the Chainsmokers credit for pushing their premise to the absolute extreme. Every creator who enters the public eye become, in a sense, a commodity. Their work is no longer just art and their personal lives are no longer just experiences: both are fodder for people who make their living in the media. They are used to sell papers, fill airtime, and power the ever-expanding economy of takes currently dominating the online discourse. They’re not human. They’re just content.

In “You Owe Me,” the singer contends that, to these people, even the discovery of his corpse would just be something to write about. More than that, it would be a boon. Think Amy Winehouse, whose untimely death was spun into a minor industry of cautionary tales and an Academy Award-winning documentary. Think Prince or David Bowie, whose deaths generated so much performative weeping and gnashing of teeth that they forever redefined the way we discuss celebrity death. If he died, Andrew Taggart probably wouldn’t get a tribute at the Grammys or a shout-out from President Obama, but plenty of paid writers would cash in by examining his “ironic” death and what his music said about The Age We Live In.

Also, this probably goes without saying, but the chorus (and the song as a whole) makes it clear that the Chainsmokers know what people are writing about them. Even if their friends don’t read the papers, they do, and they know exactly how they’re viewed and discussed. To be frank, it’s a little weird to write about a song that acknowledges why people are writing about it. It’s a little like writing a review of a documentary about myself. It makes me uncomfortable, but not as uncomfortable as what comes next.

If you’re lonely
Don’t you think you’re on your own
When it gets dark inside your head
Check my pulse, and if I’m there, you owe me¹

The second half of the chorus turns on a sly bit of songwriting: the second time Taggart mentions his “pulse,” it’s a musical pun, a play on the kind of thumping, propulsive music he and Pall produce. “Check my (heart) beat” might have gotten the point across more clearly, but it’s easy enough to grasp as it is.

But this slight tweak in the lyrics changes the meaning of the entire song: where the verses are bitter and detached, the chorus is built around a statement that’s mostly empathetic. Whether you’re a self-obsessed twenty-something looking to wallow in your own misery or you just need release and you’re looking for a drop that you can dance to, the Chainsmokers are there for you in your time of need. It would be a nice sentiment if it stopped there, but the Chainsmokers aren’t that kind of band, and they can’t let a positive sentiment like this go by without reminding you that the music you love didn’t just come into existence fully-formed: there’s someone on the other side of it. Art is never a one-way street.

That’s why “You Owe Me” is such a disquieting song, because it lays bare a sense of entitlement that we rarely discuss, but seems fairly self-evident when described: if you listen to a performer’s music and get any sort of positive experience out of it, you, in a sense, owe them. The amount you owe them varies: for a disposable pop song, maybe it’s just $1.98 in the iTunes store, but for a band that got you through your darkest times, it wouldn’t be unusual to say that you owe them your life. And while it’s easy to scoff at the idea that the music of the Chainsmokers could be the basis of someone’s mental and emotional strength, you don’t actually know that it’s not true for at least one person, and possibly many more.

Even putting aside the most extreme examples, there are millions of people who listen to and enjoy the Chainsmokers, and while the standard move for any popular musician is to heap appreciation onto their listeners (“I couldn’t do it without my fans, I owe them everything,” etc., etc.), with “You Owe Me” the Chainsmokers have made it clear that the gratitude ought to run the other way. They’re the ones putting in the work, all you’re doing is listening. Nothing in this world comes for free; eventually, you’re going to have to settle up. 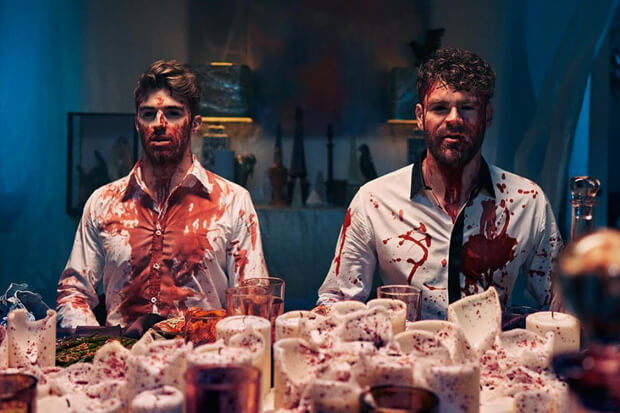 1. Pretty major caveat here: I seem to be the only person who hears the chorus this way. All of the major lyric sites have “if i’m dead, you owe me” for all iterations of the chorus, and you have to dig pretty deep to find it transcribed as “there”. But if it is indeed “dead” both times, that’s an incredibly awkward piece of writing: if it’s dark inside of MY head, why would it matter if someone else was dead? How, in any sense, would that mean that I “owe” them? It’s a little difficult because of how Taggart pronounces words, but hearing the second iteration as “there” is the only thing that makes the chorus make sense.