(in which sometimes you just gotta talk to ’em)

JASON: Say, Kate! Have you been reading Bryan Fuller’s weekly interviews with the AV Club? If you haven’t, I would recommend them: Fuller comes off like a very smart man who knows exactly what he’s doing with the show, which is refreshing and means that we’re TOTALLY right about the folder-passing shot last episode. I mention it this week because the interview following “Hassun” made me realize that not a lot happened in this episode, and that most of it was set-up for episode 5, which apparently is going to be the craziest episode yet.

Hannibal is such an entertaining show that even an episode spent moving pieces around on the board is a joy to watch. Question: has the show gotten funnier since the first season, or has it always been this way? I find myself writing down several lines per episode in my notes, just because I’m surprised at how humorous they are. Will’s lawyer, in particular, had a quip for just about ever situation. I don’t know which is better, his muted reaction when he received an ear in the male, or his line to Alana about “stepping in Young Adult and tracking it into the courtroom.” Also deserving of mention: everything about Chilton and Lounds. I cheer whenever Freddie shows up in any context, and even though I love her and her ridiculously inappropriate church-lady hat, it was sooooo satisfying when Will’s lawyer shut her down with two questions. You’re the real Paul Esparza fan here, so I’ll leave any discussion of that to you, except for two words: dat cane.

And I have to hand it to you, Kate: a week after you point out the show’s use of mirroring (which I had missed until then), Hannibal opens with the most blatant example to date. Well, technically, the episode doesn’t open with Will and Hannibal getting dressed for court, it opens with Will dreaming about pulling the switch on his own execution. I’m wondering if that’s going to get more attention, or if we’re just meant to interpret it as-is. My initial impression was that Will was expressing a latent death wish, wondering whether it would be easier to just let himself be convicted and get out of this whole crazy circus. But nothing in the episode bears this out… unless I missed something.

Come to think of it, I probably did miss something. Until I read that interview, I thought we were still meant to believe that Hannibal was the copycat killer. All those deeply unsettling lines about Will not letting the killer’s love go to waste, coupled with that unexpectedly sad image of Hannibal sitting alone in his office, lead me to believe that the new murders were Hannibal’s way of saving Will’s life, while allowing himself to remain free from suspicion. And yet, Fuller seems to imply that at this point, Will’s admirer is a mystery. What’s going on, Kate? Did I miss something? Seeing Will in that electric chair did nearly drive me into hysterics, but I do believe my delicate Victorian lady composure was restored by the end of the episode.

Something else that disturbed my delicate emotional equilibrium: Jack Crawford. Boy, back in episode one, I hated Jack for refusing to believe Will. When the two of them were speaking in the prison, I was almost looking forward to that fast-approaching moment when Hannibal jams a piece of glass into Jack’s neck — and if you ever had any doubts that I was unqualified for legitimate criticism, well, there you go. But now, I’m more on Jack’s side than I’ve ever been. It wasn’t just his act of professional suicide that doubled as a re-affirmation of his own guilt in what happened to Will, it was the conversation he had afterwards with Hannibal. We haven’t seen Bella in a while, and hearing the details of their life together as she nears her death was like a sucker-punch. The way Jack got teary-eyed and choked up was heartbreaking. I forget how great Laurence Fishburne really is, which is the risk you run when you surround him with people like Mads Mikkelsen and Hugh Dancy.

One last thing about that interview: Fuller mentions later in the season, we’ll be seeing some “other patients” that Hannibal has been “encouraging.” That’s got to be Verger siblings, right? Oh, man, I can’t wait until Mason Verger shows up. No, that doesn’t do it justice. When Mason Verger makes his first appearance, I am going to split the time-stream in half so I can watch that episode with my 15-year-old self and give him a bunch of high-fives. Wait, that may have been too much in the opposite direction. Well, I’m excited, anyway. 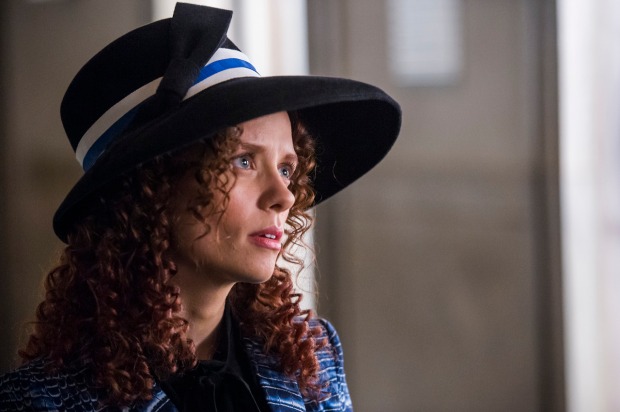 KATE: It’s good to be excited, Jason! Embrace it! I’m excited for the Verger siblings to show up as well, although I’ve always preferred my Vergers (especially Mason) post-mutilation. Spoilers, readers: Hannibal likes to mess around with his patients. Anyway, I’m sure it’ll be riveting. Look what the show has already done with the Hannibal/Will relationship! I’m not sure if the readers are familiar, but Red Dragon, the first book in the “Hannibal” series, takes place after Hannibal has been caught by Will and put in jail. The TV show is largely working in unexplored material that we as the audience had only previously imagined. I imagine (and hope!) the Verger subplot will be treated the same way. Let’s face it, good back story and prequelization are so hard to pull off successfully. I know “prequelization” isn’t a word, but bear with me. Just look at Hannibal Rising. Actually, please don’t. It’s awful.

My point being that it is difficult to retroactively pull off a background story of a character, particularly one as well known as Hannibal Lecter. There’s almost no way for it to work and it rarely adds anything. I never wanted to know why Darth Vader turned evil. Everything you need to know about him is right there on the surface. I never wanted to know how the Wicked Witch of the West became so wicked. In great stories, your villains can speak for themselves. It’s not just evil characters, either. No one needed to know how Carrie Bradshaw moved to New York and met Samantha.  All of this is just to say that Hannibal is abnormally good at its job and the Verger subplot will hopefully be no exception. There’s very juicy material there, if someone knows how to write it. As much as I love Gary Oldman, I rewatched Hannibal (the movie) the other day and man, it is pretty awful. The story could definitely stand a new approach. Yeesh.

This season does seem to be more humorous than the last. I think the snappy lines and quick jokes are part fan service and part Bryan Fuller. Like any beloved book turned TV series, there are a lot of inside jokes and foreshadowing for the fans. Look at Game of Thrones! Every time the word “wedding” was said during the third season of GoT, the editors could have inserted this cue and saved themselves a lot of time, but they didn’t. Part of that may be storytelling for people who aren’t familiar with the source material, but I think it’s a subtle acknowledgement to the fan base. The hard core fans want to see Chilton be irritatingly pompous because they know what happens to him; the casual fans want to see Chilton be irritatingly pompous because it works towards what will happen. And yes, I do love Raul Esparza. He isn’t the most subtle performer on the show, but that’s what the role calls for. Chilton is intelligent, but he’s mostly snide and self absorbed. Have they shown Chilton with a cane before? Is that related to his kidney issue? I’m almost positive Chilton doesn’t need it, he just likes showing off.

All in all, I think you covered my thoughts on this week’s episode, Jason. I found it to be a little uneventful, save for the dead judge and Freddie’s hat. Every show has its filler and development episodes, so I’m not too worried. Not to mention, we know by now to trust in the wisdom of Bryan Fuller. If he tells me that episode five will be crazy, it will be. So say we all, in the name of Fuller, Dancy and Mikkelsen.

JASON: So say we all!