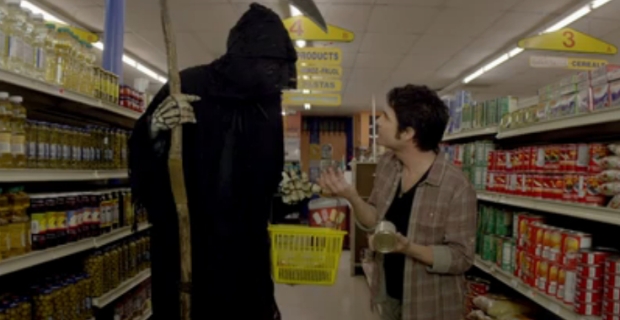 I have a love/hate relationship with the band Train, but when they released “50 Ways To Say Goodbye,” I had to take notice. I have a huge musical soft spot for catchy, up-beat songs about dark, depressing subjects and “50 Ways,” with its mariachi-style horns and lyrics about a chronic liar describing all the ways his partner died, is right up my alley. Also, I’m pretty sure the title is a Paul Simon reference, and hey, who doesn’t love a good Paul Simon reference?

I’m flattered that Train cares so much about having me as a listener, but I still have some reservations… and most of them have to do with the lyrics of front man Patrick Monahan. It all began with “Hey, Soul Sister,” the inescapable song that transformed Train from a one-single-an-album band that barely existed after “Drops of Jupiter” into a full-on pop radio fixture.

“Hey, Soul Sister” was a song that wore out its welcome fast, but I’m not immune to the allure of a strong melody—far from it, in fact—so I was onboard with it for a while. I tried to ignore the lyrics for a while, but in the end, I couldn’t deny how terrible they were. First of all, I guess “Mr. Mister” is an easy rhyme for “soul sister,” but I find it hard to believe anyone has ever “moved” to a Mr. Mister song. And the less said, the better about the embarrassing, “So gangster, I’m so thug” line from the bridge.

The less-successful-but-still-ever-present follow-up “If It’s Love” had a noticeably weaker melody, which put more pressure on the lyrics to not be terrible. For most of the song, they weren’t! The first verse in particular has a set of lines about the narrator’s fears about married life: after a lifetime of hearing stories and jokes about unhappy marriages, he’s understandably a little worried that his own might go sour. But he loves this woman, so he’s doing his best to put all that aside. It’s a sentiment that rarely gets expressed in our culture, much less in our pop music, and I for one found it refreshing!

One problem, though: two lines earlier, in the middle of the verse, Monahan spits out this couplet: “My feet have been on the floor, flat like an idle singer/Remember Winger? I digress.”

What is that? Why is that in the song? Is it supposed to be a joke? He says, “I digress,” as if this was a live conversation he was having instead of, you know, a song. I guess no one ever told Pat Monahan what a “second draft” was.

The rest of the lyrics to the song are equal parts charming and goofy, and the song as a whole would be an acceptable-to-good Top 40 song if it weren’t for that stupid digression Monahan makes for the sake of an unfunny reference to a band that, no, Pat, I don’t remember.

And then came “Drive-By.” Oh, “Drive By.” Again, great melody, and the verses are propulsive and catchy, but then you get to the chorus…. Look, I can almost ignore those two lines of “If It’s Love,” because it’s just two lines. But “Drive-By” has an incredibly dumb metaphor imbedded in the chorus, so I get to hear it three times during the song, and each time is like having a sewing needle plunged into my brain.

The culprit? “Just a shy guy/looking for a two-ply/Hefty bag to hold my love?” Huh? So, your love is garbage? That must be what he’s saying, I don’t know what else it could possibly mean…. but that can’t be what he wanted to say, because that wouldn’t make any sense. So, I’m stuck trying to figure out what sort of deranged mind would put that metaphor in a love song, and meanwhile, the song is rolling on through the second verse, and now we’re back at the chorus, and I’m so annoyed I have to change to station. Good job, Pat, you ruined another fine song with your lyrical diarrhea.

I’m sorry; I actually hate the phrase “verbal diarrhea” or any variation on it. It’s like “brain fart,” it’s super gross and you easily say something else. Let’s pretend I said something a little cleverer like, “Good job, Pat, you ruined another fine song with your unfiltered crap-spewing brain”. There, that’s good. But, I digress.

“50 Ways to Say Goodbye” mostly avoids this trap by picking one lyrical idea and sticking to it: this guy can’t deal with his girlfriend leaving him, so he’s lying to all of his friends about what happened to her. It’s darkly comic, kind of farcical, and it works… right up until the end of the second verse.

How could you leave on Yom Kippur?

What happened here, Monahan? This is a huge step back. Those other lines are stupid, but at least I knew what they meant (at least I think I know what a hefty-bag full of love is meant to symbolize). This? I don’t even know what’s going on. The narrator’s girlfriend thought he was… super-minivan? So she thought he was uncool? Is that what the joke is? That minivans are lame? Ha… ha?

And that Yom Kippur thing… if the narrator is Jewish, then it kind of makes sense, but since there’s no mention of Jewishness in the rest of the song, it just comes off as a cheap joke, something intended to illicit a laugh just because it sounds silly and not because it’s actually funny. And you know what? I think that’s exactly what’s happening here.

In the many hours I spent dwelling upon this line, a possibility occurred to me, as I am sure it has occurred to you: maybe Pat Monahan is Jewish! Well, it turns out, he isn’t, which I discovered when a Google search lead me to my new favorite blog, “Jewish or Not?”

“So,” asks no one, “If you could leave Patrick Monahan with one piece of advice, what would it be?”

Patrick, you are, at least by the technical definition, a songwriter. Specifically, you are the songwriter for an adult-contemporary rock band. Your job is to craft a set of lyrics that go with music. Ideally, these lyrics should tell a story, or make a point, or capture an emotion… and you’ve almost got it! But all of the lyrics in a song need to fit inside of whatever theme you’re exploring. If you want to throw in a quick, humorous aside, it needs to be relevant.

Here’s the most frustrating part, Pat: I know you’re capable of doing this, because I’ve seen you do it. Remember the first verse of “Meet Virginia,” a character study about a quirky woman and the man who loves her? In the midst of a long description of the titular character, we have the line, “Smokes a pack a day/Wait, that’s me/But, anyway.”

That sort of thing is fine! In fact, it’s downright good, because it plays with our expectations and gives us a little insight into the song’s narrator. I don’t know how you got from that to “super-minivan,” but… well, there’s no “but,” really, you just need to stop doing it.